【精选专题】Taiwan, a participatory process for the new cultural policy 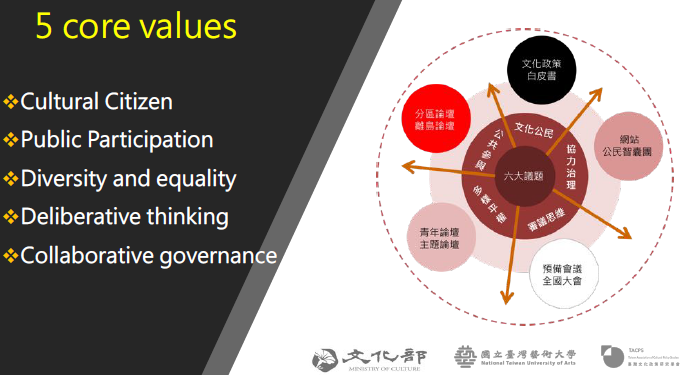 Cultural policy is experiencing a participatory revolution in Taiwan. In 2016, the new Minister of culture proposed a new approach for the formulation of the national cultural policy − the Taiwan cultural empowerment − based at the same time on three main pillars: a National Cultural Congress in 2017 (after the ones held in 1990, 1997 and 2002), a Culture White Paper and a Cultural basic law.

The overall project relies on a participatory process involving civil society, researchers, associations, young people and cultural practitioners, coordinated by the National Taiwan University of Arts (NTUA) and the Taiwan Association of Cultural Policy Studies (TACPS). The latter was created in 2015 by 34 artists, cultural practitioners and academics in order to create a knowledge platform and to foster dialogue and cooperation among the different actors of cultural governance.

The new agenda setting is the result of cultural opinions and research (by NTUA and TACPS), Ministry of Culture’s policies and six advisory committees.

To learn more about the project, we propose the interview to Dr Shu-Shiun Ku, CEO of National Cultural Congress and Culture White Paper Project, and Debbie C.Y. Lee, Deputy Secretary-General of the Taiwan Association of Cultural Policy Studies.

How did the project come about?

Since Martial Law was lifted in 1987, cultural democratization has become the main issue in Taiwan’s cultural policy.

In 2016, the Democratic Progressive Party gained the presidential seat upon winning the general election. The new Minister of Culture pledged to strengthen cultural democracy and enhance cultural citizenship by the bottom-up approach. Therefore, researchers and cultural practitioners in National Taiwan University of Arts (NTUA) and Taiwan Association of Cultural Policy Studies (TACPS) have been commissioned to co-organize the project entitled “2017 National Cultural Congress and Cultural White Paper” with the Ministry of Culture in Taiwan.

What are the main steps and related achievements of the participatory process?

In order to take the bottom-up approach to implement this project, the executive team (NTUA and TACPS) initially set up an implement mechanism, which consist of advisory committees from diverse areas including academics, industries, cultural groups and civil groups, to work with Ministry of Culture.

Based on 5 core values (cultural citizen, public participation, diversity and equality, deliberative thinking and collaborative governance), 15 regional cultural forums and 4 thematic forums (including a National Cultural Youth Forum, Forum on the Cultures of New Immigrants, Forum of Cultural Heritage, Forum of Culture and Technology) were held between March to July this year around Taiwan cities. In addition, there are 34 public petitions from ‘Citizen Think Tank’ through the internet proposals. These forums then lead to the National Cultural Congress in Taipei for 2 days on September 2nd and 3rd.

Currently, the advisory committees, the MOC and the executive team are analysing these public discussions to identify the problems and causes of the recent controversies. Most importantly, they are working together to make a new version of Culture White Paper for the future cultural policy.

It can be seen as an experimental case of the co-governance between state, academics and the third sector through practices.

The project sees an high degree of participation from young people.  How do you achieve it?

The National Cultural Congress aims to create a friendly, respectful public space for rational debate. In addition to the public forums that took place island-wide, online, social media communications via website and Facebook was used to facilitate the discussions online as well as off-line.

The Congress launched the Youth Forum which was a public space and dynamic opportunity for youth participants to voice their opinions and create dialogues with policy makers and stakeholders from the Ministry of Culture. Over 100 participants in their twenties and thirties actively took part in the Youth Forum by choosing a topic that interests them under the framework of National Cultural Congress and discuss with the group.  The Youth Forum deployed group discussion practices including World Cafe and workshop.

How to make the project sustainable?

In order to make the project sustainable, the democratic implement mechanism and strong civil society play essential roles. Firstly, the collaboration of implement mechanism between the Ministry of Culture, advisory committees and the executive team has set up an operational model of bottom-up approach for future National Cultural Congress. Secondly, the strong civil society, which the public actively participates in cultural affairs and cultural NPOs oversee the implement, can facilitate the continuity of the project.

What is the role of the Taiwan Association of Cultural Policies Studies in the project?

Taiwan Association of Cultural Policy Studies is an autonomous and not-for-profit legal organization. Its role in the National Cultural Congress is to facilitate ground research, data collection, and open accesses for citizens to participate in cultural policy making. TACPS acts as an intermediary between policy makers, advisory committees, and the public and contributes to the introduction of better informed cultural policies to promote the development of a dynamic cultural sector.